Why I Love the Creative Lighting System

if you read this blog (and I hope you do for solely egotistical reasons as I don't advertise on it, I have no kick backs, I have nothing to sell you) you know that what I love is juxtaposition. Especially if it involves beautiful women (most of the female half of the species fits this description) against a less than glamorous background. This allows me to take my favorite things and put them together. Exploring Abandoned buildings and beautiful women and photography. When I say photography I mean lighting. Most of you know that. I love a great sunset as much as the next guy and this past year I've taken a liking to some forms of long exposure photography but what I love more than anything is lighting a subject and making it fit my vision. To me every image is a problem solving exercise. Adding lights just makes it more complex (or sometimes much easier) and more rewarding and allows me to go from someone that takes a photo to someone that creates a photo.

When I first switched over to Nikon's D700 from Canon the first thing I noticed was the dynamic range. I'll leave that to other posts  to go over. The second thing that struck me was that i could use the silly little pop up flash that Canon deemed unimportant on the 5D series to control my speedlights. With Canon I was stuck with the pocket wizard flex system at 200 per unit on average and I needed at least 3 or the woefully inadequate STE3. I could always burn a flash in the shoe to work as a master but I don't believe in putting a light source directly above and behind my lens unless i'm shooting passports or I'm going for flat light for effect in which case i still don't want it directly above the lens. The Nikon Creative Lighting System was a godsend at the time since I was on a budget and could only afford one SB-900 when i switched. The ability to get the flash out of the shoe without needing to carry the pocket wizards and the extra batteries and weight was near miraculous to me.

Suddenly I could shoot any aperture - any shutter speed. I had options. I wasn't limited to 1/250th of a second with my strobes. Was I giving up some power? Yes. But what I was gaining was flexibility, adaptability, spontaneity, and the greatest ability of all: availability. I could take them anywhere. No transmitters needed. No extra batteries. Modifiers were small when I decided to use them. I got in at the beginning of the speedlight revolution when many companies were beginning to create some interesting ways to mount and modifiy the light coming form a speedlight which is inherently slightly harsh. But for the most part I was shooting on location by myself and I had to learn to adapt to shooting with the speedlight and a stand. An umbrella would blow over in the slightest wind and items like the flashbender hadn't hit the market yet. So I learned to play with the zoom and with the location of the flash in relation to my subjects. The larger a light source is in relation to it's subject the softer it is. So a closer zoomed out light source is larger and softer. But the beauty was I had the option to zoom it in and get a harder light when the purpose suited. Options. Options were why I fell in love with the Nikon CLS system.

The biggest break for me came when I realized that every image i created with flash was really two different images. I know that sounds trite now but I'd never seen anyone put it in writing. I'd certainly never had anyone explain it to me that way. i didn't go to school for this. Once I realized that my exposure in camera was for the light I couldn't control since I could trust ITTL to expose the subject correctly (I do put the flash in manual sometimes but not often - it's called the McNally Rule: If it's good enough for Joe it's good enough for me)

Lets think of that for a moment. I broke the flash photography down to a point where it was easier for me to shoot flash than it was with no flash. I no longer had to make a choice between getting my subject and my background correctly exposed in an image. Putting the sun behind a subject was no longer solely for silhouettes. I didn't have to overexpose a room to get my subject "correctly" lit and for that matter the concept of "correctly" exposed went out the window. I could now paint the sensor the way I wanted it to look.

Here is the three steps breakdown that I use. Keep it Simple.

2. Pick a shutter speed based on how you want to portray the background. THE SHUTTER SPEED CONTROLS THE AMBIENT EXPOSURE.

3. Move, Modifiy, Zoom, etc the flash to create the QUALITY OF LIGHT that you want in the image. If you get the first two steps then you are 90% of the way toward making great images with your flash. This third step is about taste and creativity and you may find yourself changing up your style a thousand times for taste, based on where  you shoot, on whom you shoot, etc etc.

Here is a cropped image of Victoria Robinson in an abandoned building. I left the flash stand in and cropped around the modifier (seen in photo 2) because I'm not a great Photoshop person and so that you can see where the light is coming from. If I wasn't lazy I'd spend some time removing it or I would have reshot the image with the flash a little to the left or I would have moved. This shot started as a BTS of the lighting set up and ended up being the one that I liked Victoria's face and pose in the most from this set. In this shot I opened the shadows just plus 10 in Lightroom in order to get some detail in the portion of the shot to the camera right. 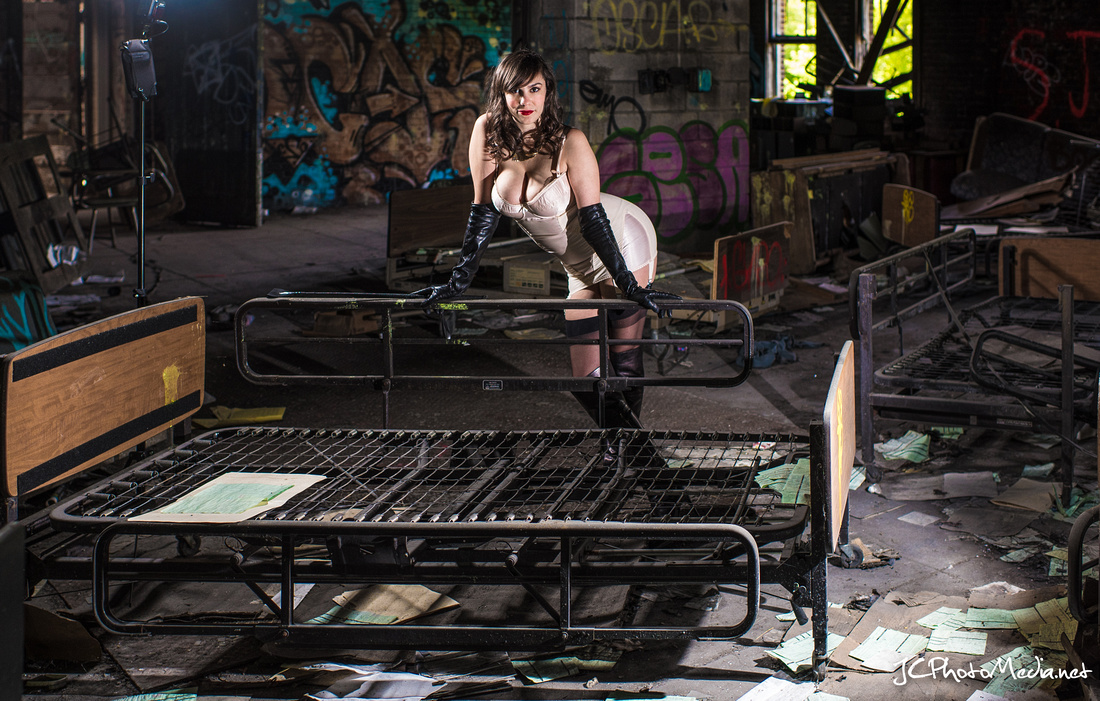 Aperture - I picked 2.8. With a 35 1.4 lens the depth of field at 2.8 is still enough that the viewer will automatically know what kind of location the shot is in while still shallow enough to bring attention automatically to the model. Obviously the light is what will really send attention the model but plane of focus being as shallow as it is is an important aspect of shifting your eyes quickly to the model even with the slightly blown out window in the background vying for attention.

Shutter Speed - 1/125 at ISO 200 gave me a nice spooky exposure for the abandoned building. The color of the grafitti is visible and the light outside is only slightly overexposed. shooting the shot at ISO 100 would have given me a 1/60th exposure to equal this but I'm sharper at 1/125 and the flash lasts twice as long.

Flash Placement - the flash to camera right is the easy one. It's an SB-700 tilted sideways so that it lights the length of Victoria's body and it is zoomed to 85MM so that not much of the light is spilled to the background. The camera left is high and to the side to add drama and shadows to the model who would look flatter and wouldn't fit into the scene as well if I had used a large softbox up and over the way I would if this was a glamour shoot. The Rogue Flashbender gives me a larger light source (thus softer) without taking up a ton of room in my bag and gives me the flexibility to bend it so that the light is going where I want it. 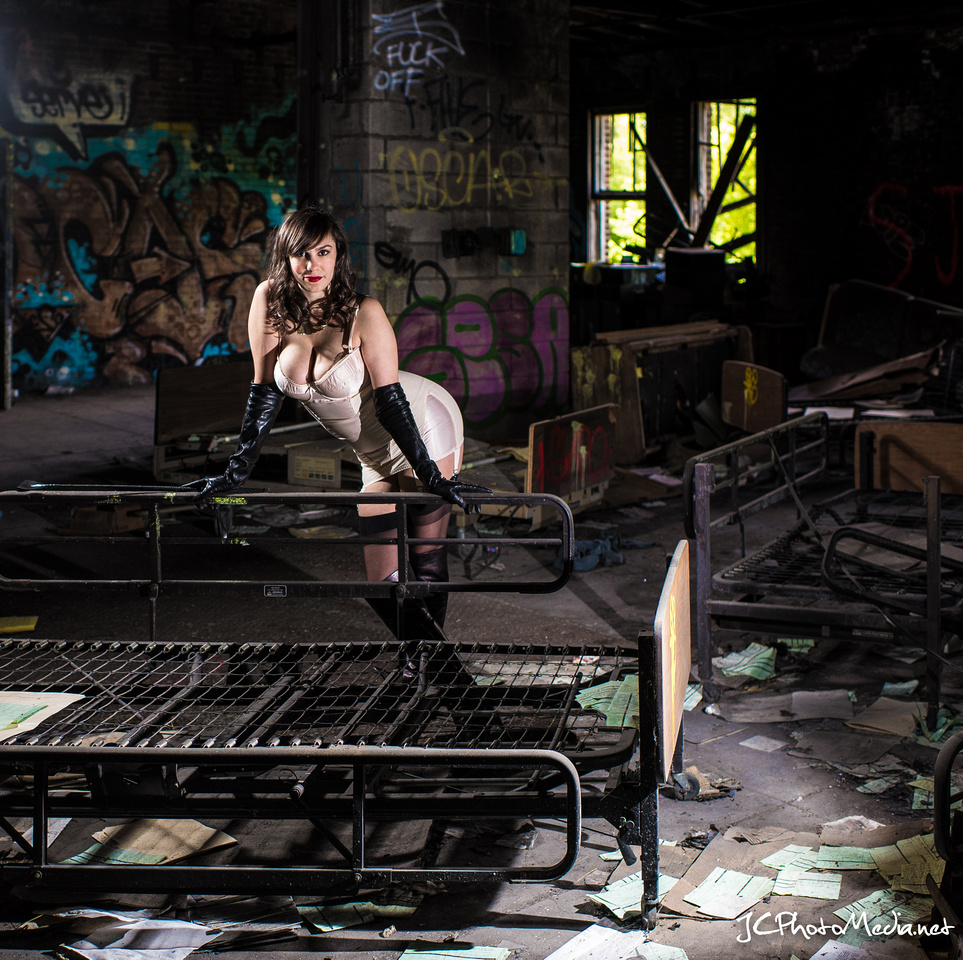