Dynamic Range is a word that gets thrown around a lot in photographic circles. Unlike many of the hip words, concepts, and phrases that get thrown around it's one that should be even more on the tips of most peoples tongues. What is it and what does it mean to your photography?

Simply put Dynamic Ranges is a measurement of the ability for a sensor to record highlights and shadows while maintaining detail. There are far more scientific places and descriptions on the web and I'll leave those descriptions to those sites. For me, more so than high ISO Dynamic Range is the key component of a sensor. The ability to accurately represent what my eyes can see in a scene is more important to me than the ability to bring detail in places that I can't. High ISO performance has already in many ways outdistanced the performance of modern auto focus but the dynamic range of cameras is just now touching the world of our eyes. Most scientists say that our eyes are capable of roughly 24 stops of dynamic range (DR) but that they can only see 14 or so in one scene. Do NOT mistake what i just said for me not wanting amazing ISO performance. As a flash photographer the higher i can set ISO and maintain peak image quality the stronger and more versatile my flashes become. That means that with each higher stop of ISO i can trust in my camera I effectively double the power of my flash. By raising my ISO from 100 to 200 to 400 to 800 I have doubled the power of my flash 3 times. It can also mean that I have effectively tripled the battery life for my flashes if i keep the power at the lower power output.

It is important at this point that if you don't know me and you are reading this - I work for Nikon Professional Services. I shoot Nikon. It's also important that you know I shot with Canon my entire adult life before buying a D700. I owned the D700 and the 5DII for a short time together and then due to a heavy investment in glass I kept the 5DII. Ultimately I was disappointed in the dynamic range of the 5DII and it's successor the 5DIII and had my gear listed on ebay to sell at the time that I was offered the job with Nikon. While people can argue ergonomics and "feel" there are things that can be scientifically measured. Dynamic Range and ISO performance are two of those things.

Companies such as DxO spend a lot of time and effort measuring the performance of sensors in the camera industry. To the best of my knowledge they have no stake in the game and nothing to gain by putting forth there results independently. The testing as I understand goes toward helping to create their excellent raw processor DxO Optics Pro and make sure that it gets the most bang out of the sensor in whatever camera you are using. In the results that DxO found for three top of the line camera's the D810 was head and shoulders above the competition at 14.8 EV's.

Want a visual example? We are visual creatures after all.

These two screen grabs are of the same image. During preparation to present at the B&H Event Space on December 8th I was creating images with model Francesca Mars. Part of the teaching process is to show the mistakes and the what if's. I set up my flashes for a series of shots and then disabled them to take a "before shot" after which I would turn on the flashes with the Nikon D810's Creative Lighting System via the pop-up flash. The difference is monumental between the before and after shots with flash and without flash (scene in an earlier blog post on this site). You know it will be. It's like walking into a room and turning on the light. But imagine for a second that you don't have lights in the room or you don't have any external light. The dynamic range on the D810 is so good that even if you have no light you can produce a solid image. 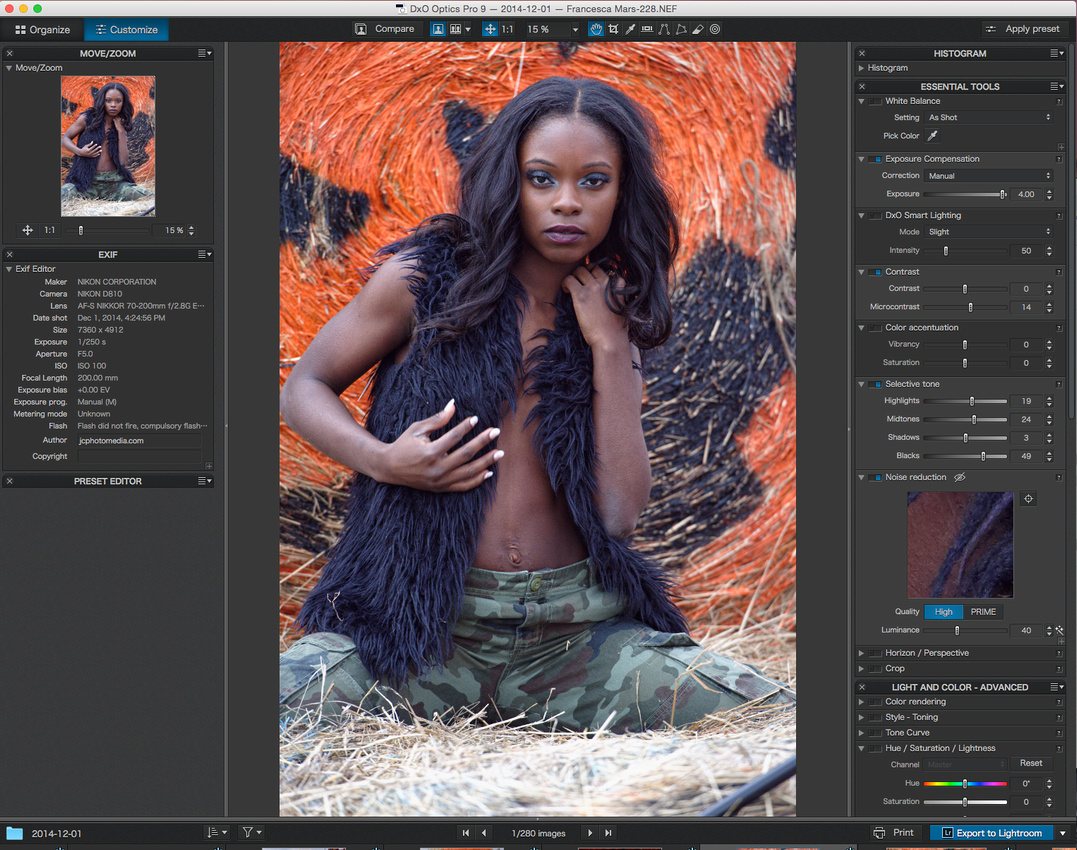 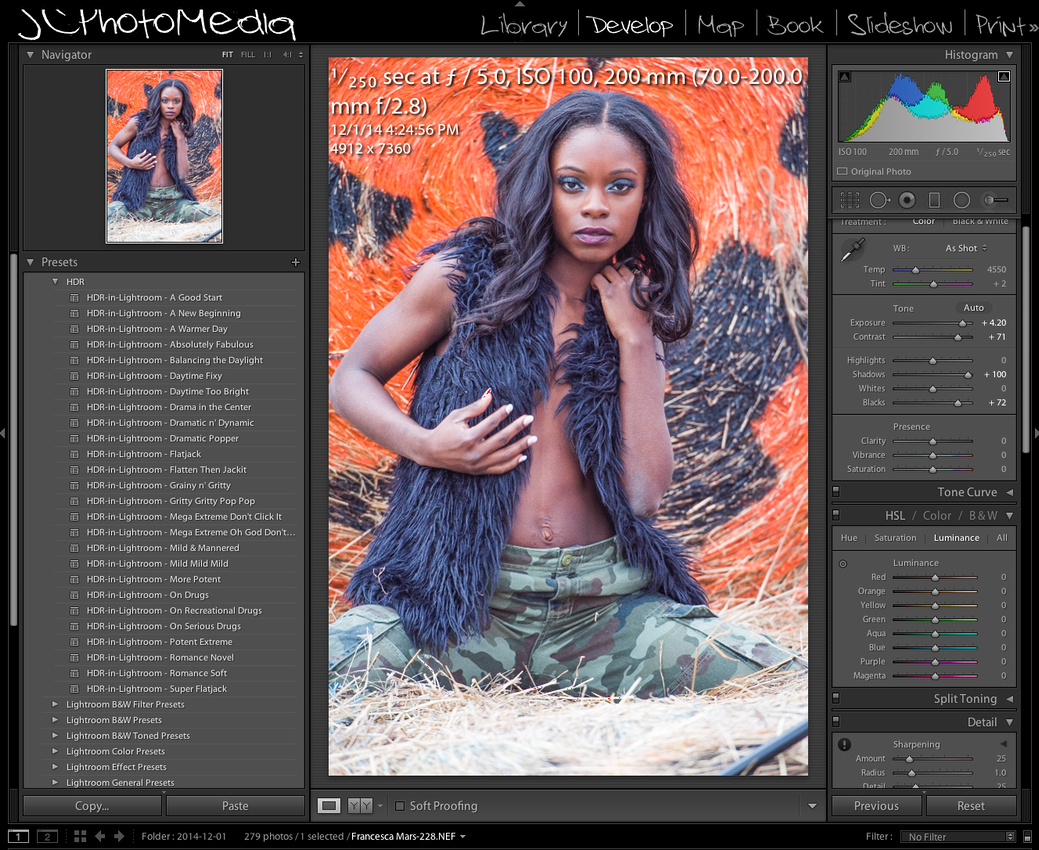 This is a screen grab of the same image in Lightroom 5 pushed 5 stops including the data for the shot. A Bit too light but with plenty of detail.

In the past with gear that I owned I would never have considered pushing my camera more than 1.5 stops and even if i did I would know that the blacks would have no detail. Just sludge. The limitations of the gear helped create the stark look that I embraced at the beginning of my photographic journey and I am thankful for those lessons in how to control light as i stand firmly by the hypothesis that we learn far more from our mistakes than our successes.