China With Off Camera Flash

"Travel is fatal to prejudice, bigotry, and narrow-mindedness, and many of our people need it sorely on these accounts" Mark Twain

I've tried writing this entry for weeks. Nothing I write will fully encapsulate the trials and successes of Beijing. The 2nd largest city in China and in the World the actual city proper has over 21 million people that enjoy food that I didn't like and that wear underwear that are too small for me. For the first time in my life an airline lost my luggage and at 6'5" i spent three days in Beijing with only the underwear that I brought and one extra that was at the bottom of my camera bag to help pad my gear. It was an interesting couple days of washing underthings in sinks and searching for clothes that would fit me like a knight on the look out for a special cup.

All that being said I wish I had been there just to take pictures...While I didn't like the food I loved the place. The mix of the old and the new juxtaposing together was amazing. I carried a Nikon D810 most of the trip and as usual it never let me down...As usual i ran around with a SB910 or two 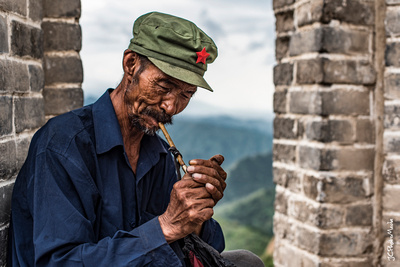 With these two images I had just climbed 102 steps chasing down this man whom i could see at the top and KNEW would make a great portrait. My normal tact in these situations is to offer an image as a kind of payment but from talking to the people at the bottom it had become clear that the vendors that took up residence on the wall sometimes lived there and even if they didn't they were very poor. He had no phone and probably no computer so offering to send him an image was pointless. I had water with me but in return for buying two bottles of water he agreed to let me take two images. I handed a kid that was in the tower my flash and showed him not to cover the receiver. I positioned his hand to give me the light that I wanted. I only had 2 shots so i had to kill it. I had turned down the light to -1 stop for the first shot hoping to keep the look of the overcast ambient light while erasing some of the shadows that were being cast. Chimping  it on the LCD i felt it was a bit too dark. Still a nice shot  but I only had one more so I moved to -1/3 and quickly zoomed the head a bit more so that the light would hit him. I got lucky. One of my favorite portraits that I've ever captured. 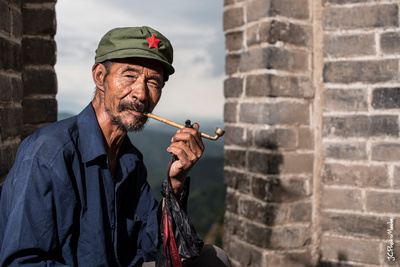 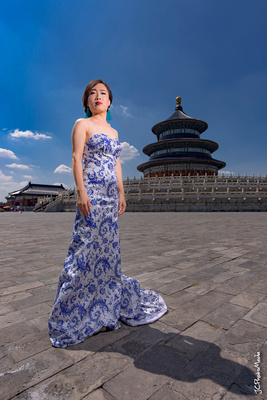 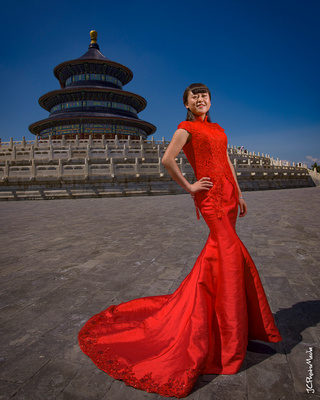 These two images were captured at the Temple of Heaven which is apparently a popular destination for wedding shots amongst Chinese couples. There were about 8 couples while I was there all having their images captured with ancient gear and no flashes. I was standing and watching the pattern of Bride, Couple, Groom until I decided to step in after the couple and show the brides my phone and camera asking for an email address so i could take their picture and send them a file. I had based my exposure off of the sky and the temple while I waited knowing that the Nikon metering and iTTL would do the trick with the flash exposure. One shot each. i wish I had more time with both but I was already being rude toward the hired photographers by stealing the brides....