Behind The Scenes - Kelsey and The Motorcycle

One of the things that I personally take pride in is when I get to revisit a subject and try to improve upon whatever I did the first time. It's why i will revisit certain spaces over and over seeking to make improvements. I live by a maxim that I will learn more from what I screw up than what I get right. This month I had the chance to revisit a model that I have shot before but it's been over 3.5 years since the last time.

Kelsey is a beautiful redhead and if anything is getting more attractive with age. Her fiancé is the owner of a Brooklyn landmark called Lucky 13 Saloon. Someone reached out and one thing led to another and the idea that we should do a shoot in the bar with her man's motorcycle as a central prop took on a life of it's own. We scheduled for a few days later and here's what happened....

For this BTS shot there are three lights. Many of the shots during the day were done with two. Two is my normal with the Nikon SB-910 and SB-700 being my workhorses. In this shoot I added a SB-500 to the mix on the ground to fill in some detail in the motorcycle and to give a little more shine to the motor.

I am not a product photographer so Kelsey remains my priority but I did want the image to have some pop and show the bike for the piece of art that it was.

The process I use to create the image (and all my flash images) is always the same.

1. I pick an aperture based on how much depth of field i want. For this image I was shooting with the Nikkor 35 1.4. Wide lenses have more DOF even at small apertures and since this image was about Kelsey and the motorcycle I picked F2. This would allow for the club and the posters to be part of the image but more as an afterthought while driving the focus where I wanted it. The lights that are added later are also a part of this.

2. The next step is to pick a shutter speed that gives me an exposure that I want for the scene. NOT for the model. The model will be lit later and it's a very helpful tool to think of the final image as two different exposures. One for the ambient/background and one for your flash/subject. In this case I wanted very little light from the club so I picked 1/100th of a second. The club was already dark so at f/2 at ISO 64 the first image is what I got at 1/100th. More than fast enough for me to produce a sharp image later when the lights are added

3. Light the subject. In this case I used two main lights. On camera right is the Impact Hexi 24 with a grid. The grid is important as it controls the throw of the light and keeps it focused on Kelsey while also maintaining a soft light. An umbrella would have given me a nice large soft light source but also would have thrown far more light all over the background which i didn't want. The other main light is to camera left and comes from my favorite mod. The flashbender from rogue. It's my favorite because it gives a nice quality of light while fitting in the laptop part of any bag i carry. It also allows for lots of flexibility (pun intended)

For expample - the ceiling was black and high and not a great bounce surface so i curved the top of the flashbender forward so that i was throwing more light toward Kelsey rather than wasting it on the ceiling. I could have bent it on a side angle as well to control spill to the back wall but I was fine with the posters showing since the f/2 aperture assured they wouldn't be in focus and thus not the focus.

I added the SB-500 as a kicker. I love this little flash as it can be a remote and also has a built in LED in case i need some fill while doing video. 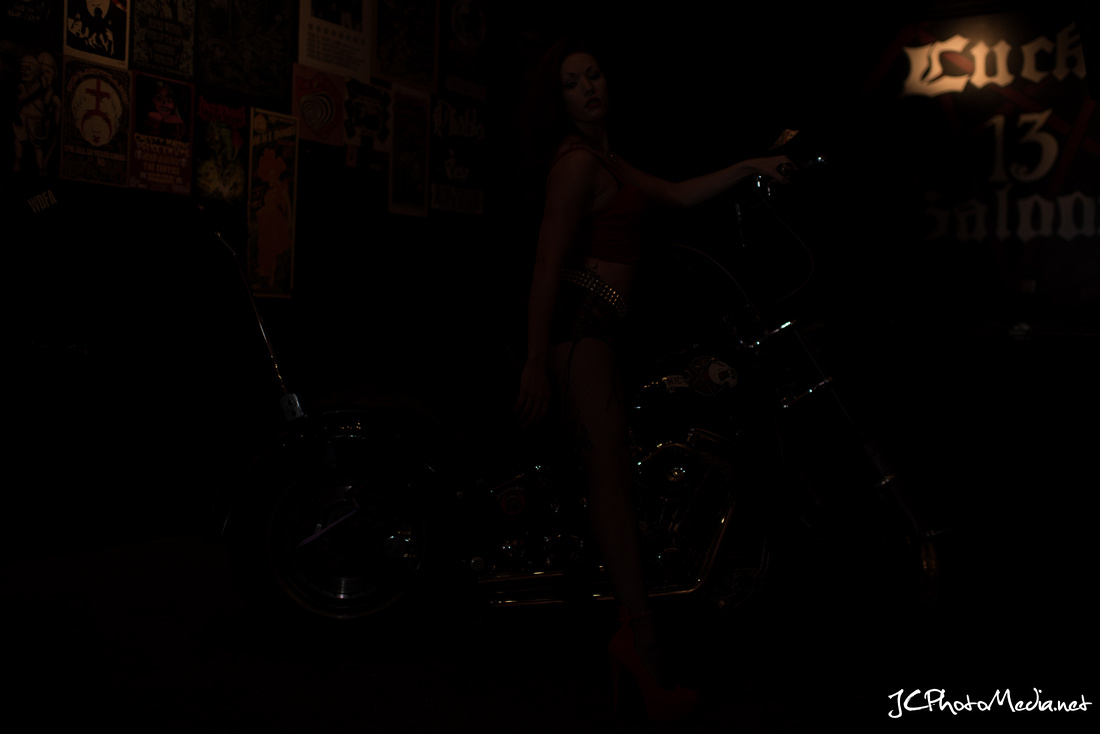 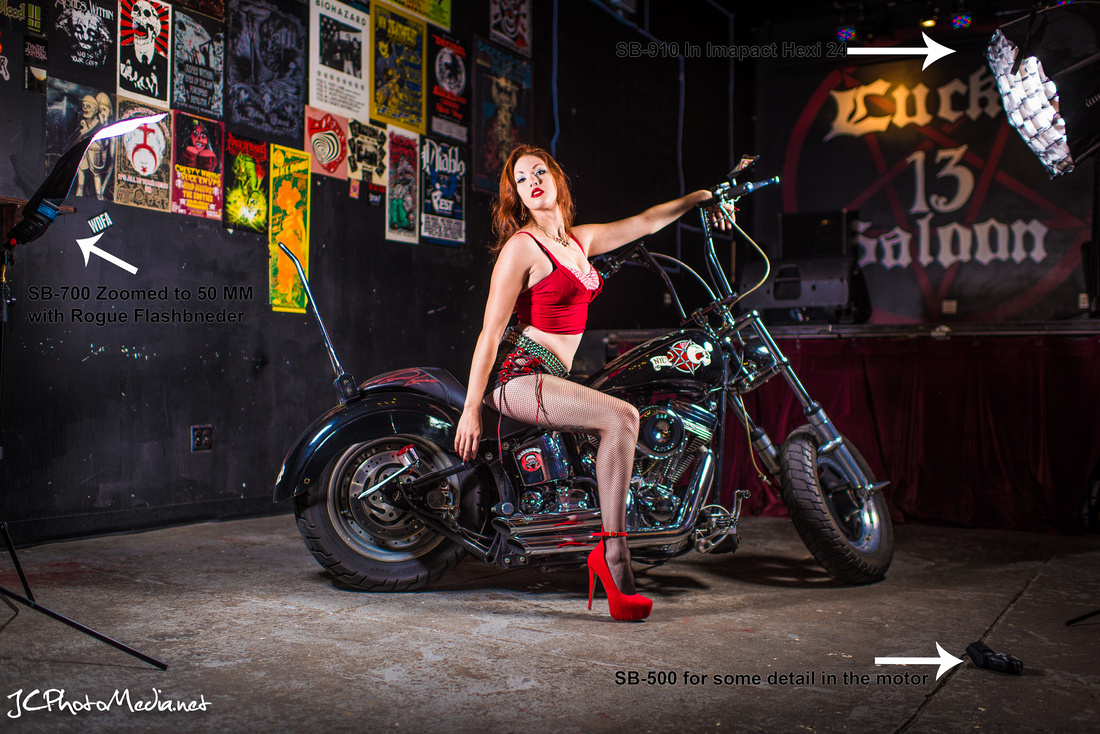 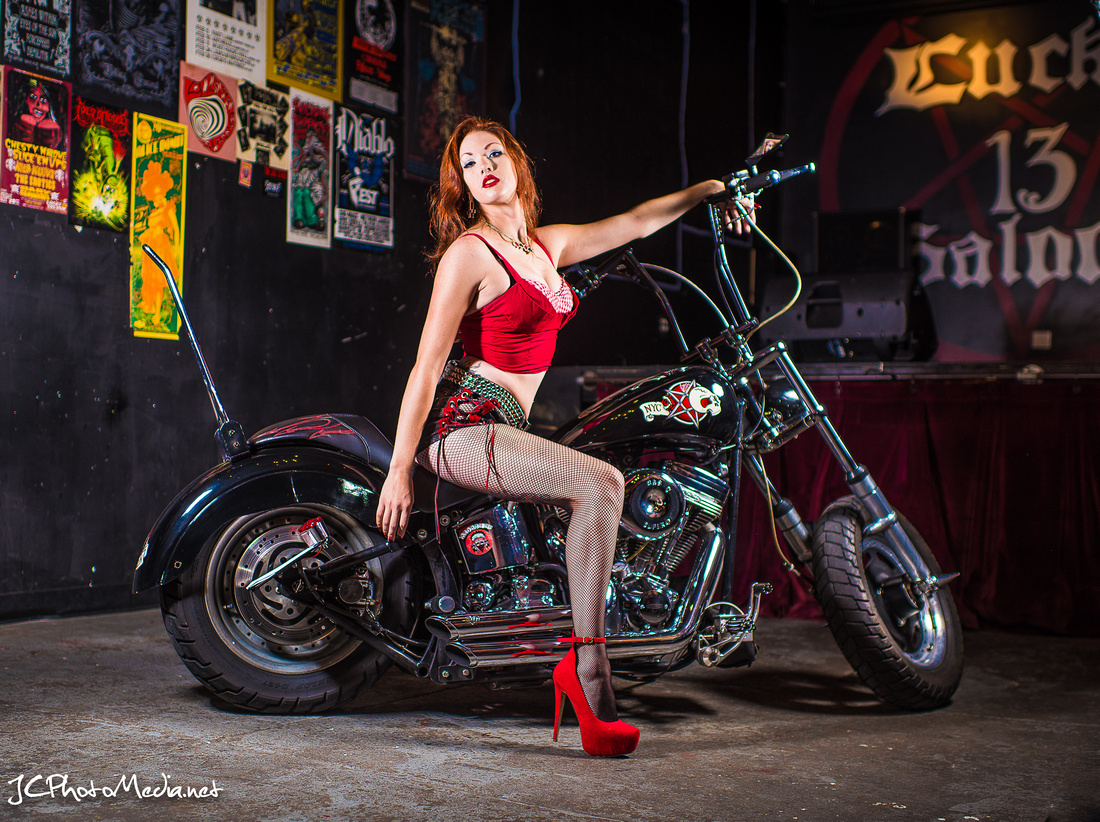