Fitness In The Rubble Part 2 with Prime Omega Fitness

Shooting lit portraits on location is the thing that really makes me excited about photography more than anything - I'm constantly moving, looking, searching for different vantage points and then trying to figure out how to light it. A lot of the time it fails. But without failures you learn nothing. For the first bunch of years that I was doing this I shot with only one light and I told myself that it was because I liked the simplicity of one light - I liked the way that i could market myself to a certain extent as a very self contained unit that was capable of some pretty cool results with just one speedlight. There came a point though where i realized it had more to do with me being a little scared of adding more to my bag and to my problem solving abilities. With only one light there was a lot I could do but there were things i could not do and I learned to accept and defend those excuses rather than break the barriers. In the last few years I started to add a second and even a third light and most times now I'm working with two lights because it gives me more creative control. It allows me to create images that are what I imagine rather than what is given to me.

In the below Image I was using three speedlights - all Nikon SB-5000's controlled via the WR-10 from my D5.

The main light is just to camera left in an Impact Hexi24 - it's pretty much straight to the subjects and up at a 45 degree angle down toward them. This light is just to make sure that all three subjects have some soft light on them. Even though I'm saying it's the main light in a way it's not as it doesn't create the drama in the image the way the light to camera right with the Rogue Flashbender XL and the rear bare SB-5000 do. The Flashbender is set almost 90 degrees to the right. Not quite but very far. Due to the ability to make a larger light source out of the small flash it is softer but not as soft as the Hexi. By positioning it to the right it helps bring definition to Keith's abs and Cait's back. The light behind is what gives the rim light to Kieth's back and helps to separate him not just from the background but also from the women hanging on his arms. That little sliver of light between him and Sonia helps to define both of them. The little bit poking sliding past Keith's arm also lights the back side of her face just enough to keep it from being engulfed in the shadow's of the building. 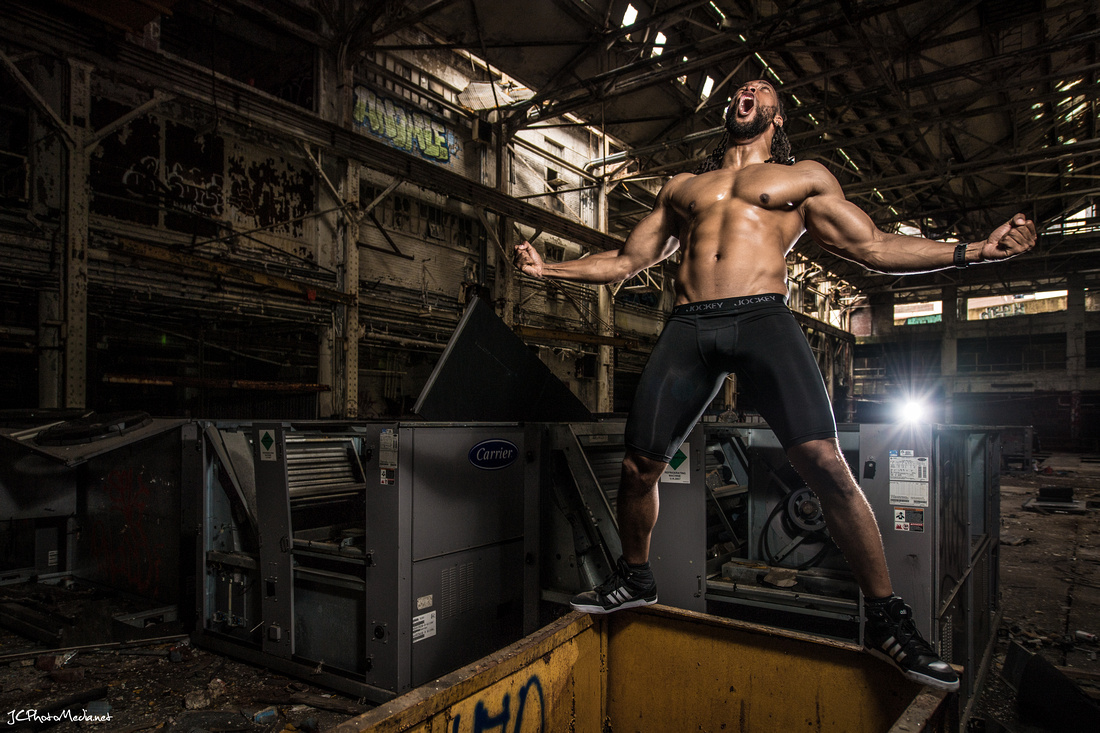 This image is using a similar set up but with only one model to light I wanted to concentrate on the muscles that Keith brought to the party. The main light is again the Hexi but it's up and to the camera right this time so it's a bit more directional. I also added the grid at this point wanting his legs to fall into shadow and be defined by the rear light. This image only has the two Nikon SB-5000's in action. I normally won't leave a light in the shot but i personally liked the look and felt that rather than draw my attention directly to it - it pulled me to the right side of the frame to make sure that viewers were looking at Keith. The way the bare light defines his form from behind is very effective in making sure that his skin tones remain separate from the colors of the building. I could have done some trickery and taken a second image without that light and then masked it out of the image if I was really distracted by the bare flash being part of the image. 1/80th @ 3.5 ISO 160 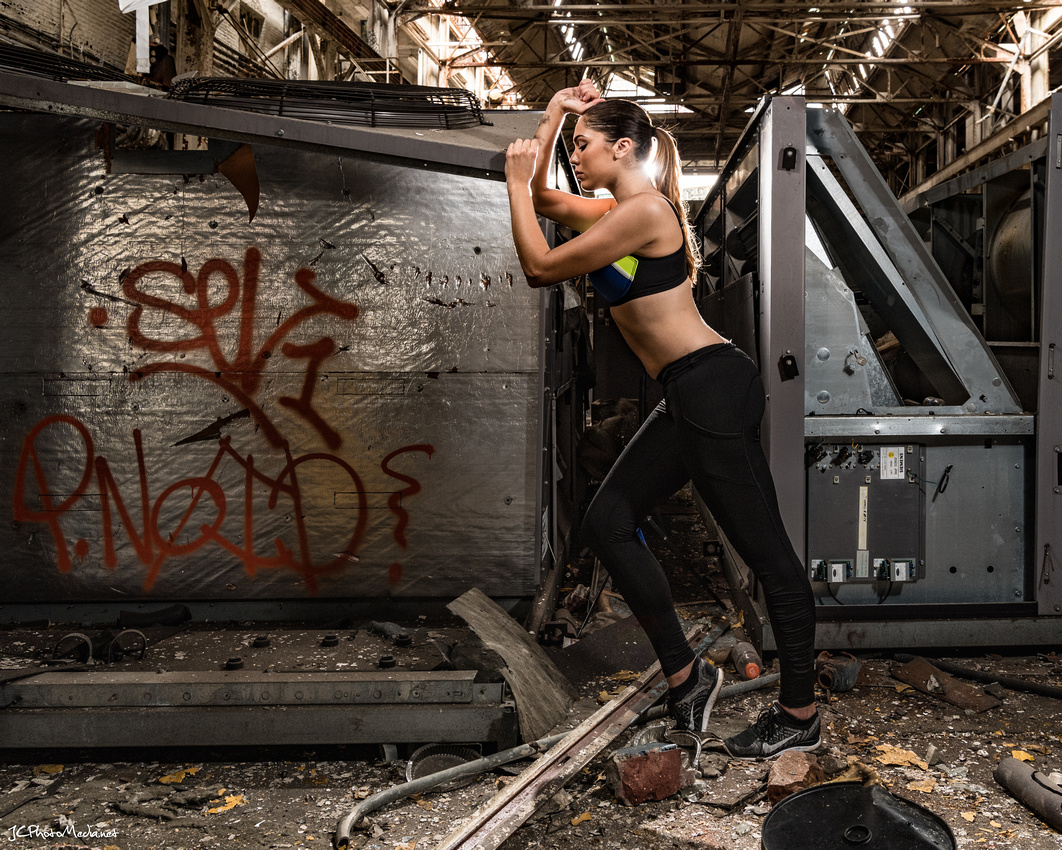 This last image the rim light is pulling heavy duty again as it puts just enough light on Sonia to make sure that she isn't part of the shadows behind her. The main light is a 24 inch shoot through umbrella for this one. It was quite dark on this side of the building and without the light streaming through those upper windows (which give the ambient to the Keith yelling shot above allowing for an 1/80th shutter) I needed a larger light source to light the machinery. In this image I am a 1/25th at F8. ISO is now 640 in order to let some of the building to "fill in" The umbrella spills light onto the machinery and leaves Sonia looking soft but not too soft which is what I needed in this case.