July 4th weekend in Manhattan is amazing. No traffic, less people, and on this weekend perfect weather. I met up with Emiri and headed downtown. I knew from the blue sky, fluffy clouds and the lack of pedestrians that I was in for a good morning of shooting. When i saw the dress that Emiri was going to wear for the shoot I knew that i was in for a great day of shooting. We parked on Bleecker and I sorted out my gear. 2 light stands and three Nikon SB-5000 speedlights as well as my go to mods.

I also had a justin clamp and the amazing (i have a whole blog post based on this item) new Tether Tools Rapid Mounts - Love them. Didn't get to use during this shoot but they are making life much easier indoors and out in tight spaces.

Once ready I found a shot i wanted at Bleecker and Hudson looking straight down to the World Trade Center. The wind was killing me and with no VAL to assist i used my camera bag as a weight on the the stand for my main light which was holding the Hexi24 (no grid). It held but just barely and I abandoned the setup before I wanted to but not before I created this image. I wanted to work the 70-200 2.8 into the set up to compress the background but anytime I walked even a few feet away from the stand the wind kicked up. I love my black and yellow sand bags but carrying them when I'm shooting on the move is a workout. So I stuck to the Nikkor 24-70 2.8 VR for these and kept the WTC in the background small. The other issue was I didn't get a proper behind the scenes images for this. 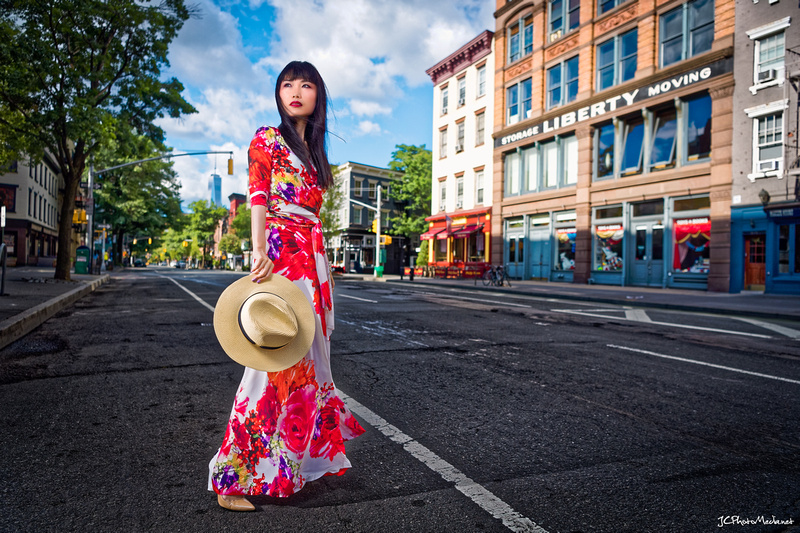 When I'm working a set up I generally move between a few different f stops and shutter speeds to get a few different looks safe in the knowledge that the ITTL will give me an accurate amount of flash regardless of what I do. If I'm working with a subject that is not moving though I will sometimes set the flashes to manual in order to conserve power (no preflash needed) and to remain as consistent as possilbe. TTL does an amazing job but can be tricked in certain situations. This was not one of them. For these images I used ITTL.

My process is always the same and it's something that i do in my head most of the time now unless I'm creating images to use for teaching. With a little bit of practice this will become second nature to you as well.

I pick an F stop based on depth of field that I desire for the the story I'm trying to tell with the image. In this case the cars and the street behind the subject did not help me tell the story so i picked a stop of 3.5 for these. Just a 1/2 stop from wide open to pick up a smidge of sharpness while maintaining a shallow depth of field that when combined with the flash would tell the viewer where to look.

The second step is to pick a shutter speed that gives you ambient light that you like. If you look at my behind the scenes shot you can see that the street was slightly blown out and the trees weren't a rich green. You also see that Emiri is slightly in shadow and that her dress colors seem a bit subdued. By choosing to underexpose the scene a little bit the colors in the trees and sky would grow richer...the dress would pop a bit an the cars that I could not eliminate with framing are reduced in importance.

The first shot from the BTS is 1/160th of second - this is the metered reading. The second gave me more of the look that I wanted from the trees and sky. By speeding up the shutter speed to 1/500th of second and adding flash as the main light source for the subject you get what you see in the next two shots. The placement of the sun behind the subject gives a nice rim light on her hair to keep it from blending into the background (if I had no choice i would have added a second light to create the same effect) and the hexi provides a nice soft light over the subjects face and dress. The second "after shot" includes a second bare flash aimed at the fence in the foreground. 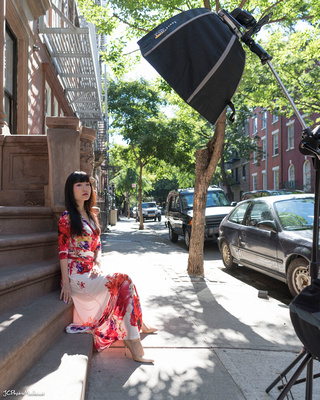 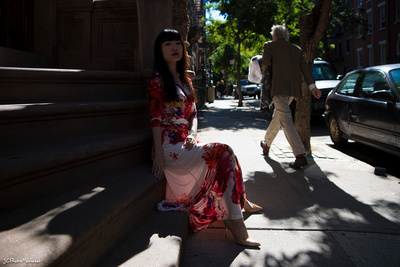 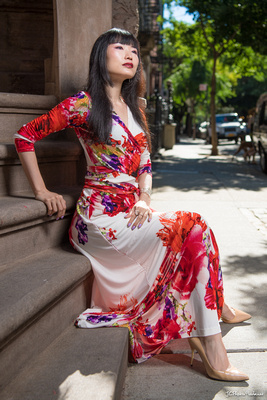 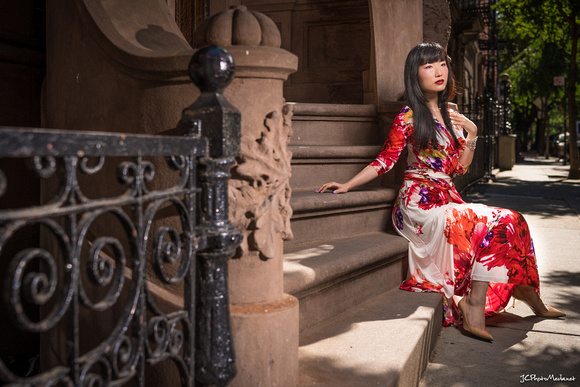