I've been shooting a long time and I've shot lots of different stuff. One of the things I never shot were fireworks. I've read up, asked advice from other photographer friends etc. None of the advice I received worked when the fireworks I finally had a chance to shoot were not where I expected them to be. 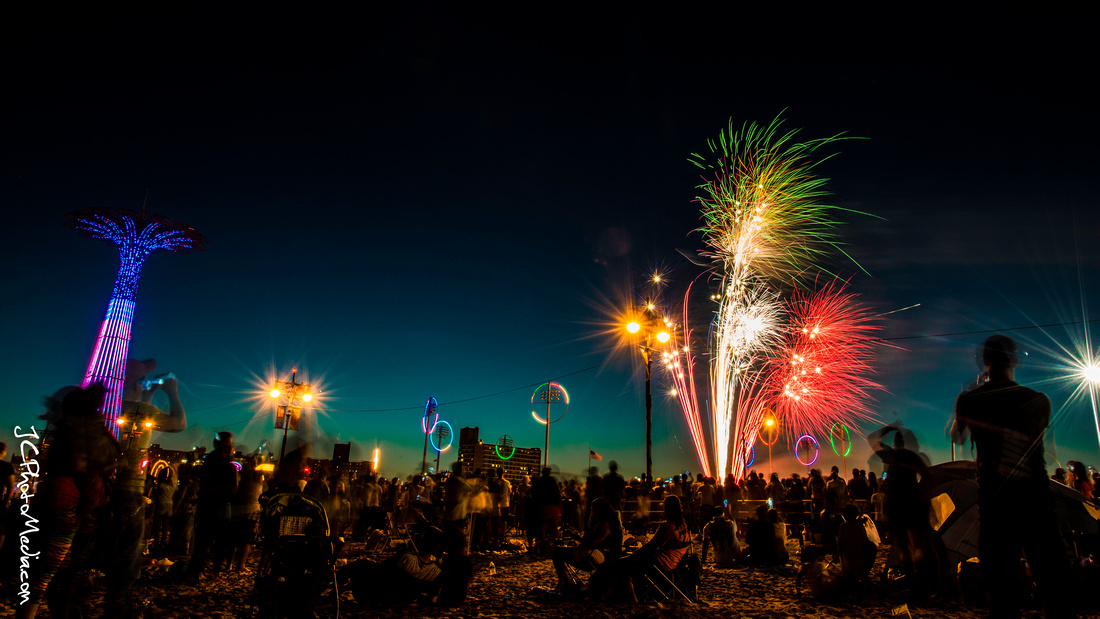 Out for the holiday with the family I had a choice between the total mobfest that i was sure the West side of Manhattan would be as they put the rocketry over the Hudson away from the majority of NY'ers (I was raised in Jersey (born in NYC though) so I won't rip em but honestly - cutting out three boroughs from being able to see the fireworks makes no sense. It also keeps the Jersey folks on their side of the river which stops tourism dollars so overall not a smart move. Enough Socio-Economic rambling though.) or the wonder of Brooklyn: Coney Island. In the words of the knight in the last crusade "I choose poorly" at least I thought I did till i saw this image which I dig.

I grabbed my Nikon D800 with the 24-120 f4 (thanks Scott) and we found ourselves a good spot on the beach with the patriotically lit parachute jump in the background. I would have liked them to fire over the Cyclone or the Wonder Wheel but it's not my show...

I set up the Manfrotto BeFree in the sand and started doing some short test shots to allow the boardwalk and the crowd to be slightly lit.

The signs around Coney Island said "Fireworks 930PM" so it was with a bit of surprise that the show began a bit earlier. It was still blue hour - not totally dark especially not in the West where the fireworks were coming from. Combined with the lights of Manhattan in the distance (the ambient spill of the city easily visible for the 15 second exposures at f18 that I found to give me a mix of darkness and detail) and the lights of the boardwalk that they decided to leave on to defy reason I was in a situation where it was not going to be the fireworks shoot that i had envisioned. The fireworks never even got high enough into the sky to really trace themselves against the blackest parts of the night sky but I was still pretty happy with this shot. It has a little something that I don't get in the straight up fireworks shots that for me comes from the soft orange light on the audience.